Sorry, this entry is only available in German.

The first things I recognized are: 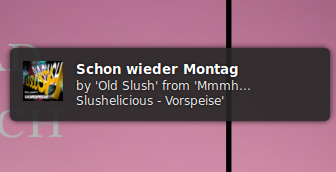 Last week i finished a first final version of my script CSong (Current Song). CSong is using the Ubuntu notification system, to show which song is currently played in Banshee.

Once in a while I want to check what is the title (or the artist / the album) of the song, that is currently played, without opening Banshee.

The actual version shows the title, artist and the album (with cover art). Of course only if the song tags are set correctly. If the song is changed, the bubble is updated as well.

You can easily install the program via my PPA, (the source code is available there as well):

The current song is now shows in a bubble if you use the command csong in a terminal. I have set a keyboard shortcut, to have good access to my song information all the time. 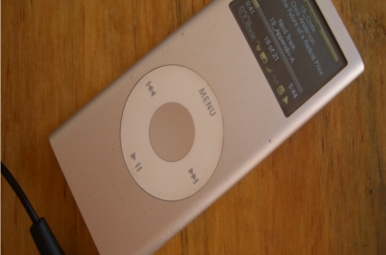 Since Summer 2009 Rockbox is running (unstable) on a iPod nano 2nd generation. Reason enough to try it.

Rockbox is a free software replacement for the firmware held on various forms of digital audio players (DAPs). Rockbox offers an alternative to the host device’s operating system firmware (in many cases without removing the original firmware) which provides a plug-in architecture for adding various enhancements and functionality to DAPs which are not present in the original OS. Enhancements include PDA functionality, applications, utilities, and games. Rockbox can also retrofit video playback functionality onto DAPs first released in mid-2000. Rockbox also includes a voice-driven user-interface suitable for operation by blind and visually impaired users. […]

(from Wikipedia, the free encyclopedia)

Especially the possibility to watch movies on my iPod makes the try worth it.

For installing I used the RockboxUtility. The iPod Nano second generation is not yet recognized automatically, therefore you need to set the mountpoint correctly in the settings dialogue. Automatic installation is also not yet working. Open the tap Installation and install the bootloader and Rochbox separately. The most recent version will be downloaded automatically. Within the tab Extras, you can install more themes and fonts, to make your iPod look better, than already the case. For Doom on your iPod you also find the needed files here.

When the installation is finished Rockbox will be loaded when starting your iPod the next time. The handling feels as nice as with the original firmware, but there are much more menu points. To get the music in your iTunes database played you need to actualize the database once.

To transfer music to the iPod you still need to load the original firmware, because Rockbox freezes when connecting. Therefore flip the hold switch while starting. Now connect the iPod and fill it either per Drag&Drop, or using a program like Banshee.

Banshee recognizes the iPod as Rockbox Device and you can just put all your music there. Banshee saves the album covers as cover.jpg in the appropriate folders, so that they are shown while playing your music.

Movies need to be a MPEG1/2 file with an resolution of 176×132 pixels in order to be played properly. To convert a movie you can use on of those commands:

Then it is ready to be transferred and to be watched. It is nearly like cinema.

A detailed manual for Rockbox and the iPod Nano 2nd generation is available on the developer’s page.

Warning: Doing so you might lose all your warranty and spoil your device. You can do it, but at your own risk.

[Update 24/03/2010]
If you accidentially destroy your iPod firmware, you might be able to get it working again using this manual: How to repair / restore iPod firmware on linux. Take care, what you are doing. Like the author of this article i have overwritten the master boot record and my partition table trying it the first time.

Filling the iPod with music is now also working with Rockbox natively.

Due to the fact that I am staying in Uganda for several month, it is somehow difficult to buy the CD. So: Download it. Although there is no copyright law in Uganda, which would forbid to download a CD-rip, I would like to support the artists.

As I am using Ubuntu as operating system, I cannot (and do not want to) use iTunes for downloading music. But you can download music using Amazon. Downloadmanager downloaded. Album chosen. Logged in. Error…

Please note that AmazonMP3.com is currently only available to US customers.

Now I know again where the free of charge attitude the “Digital Natives” comes from. You not only safe money but also time and nerves…