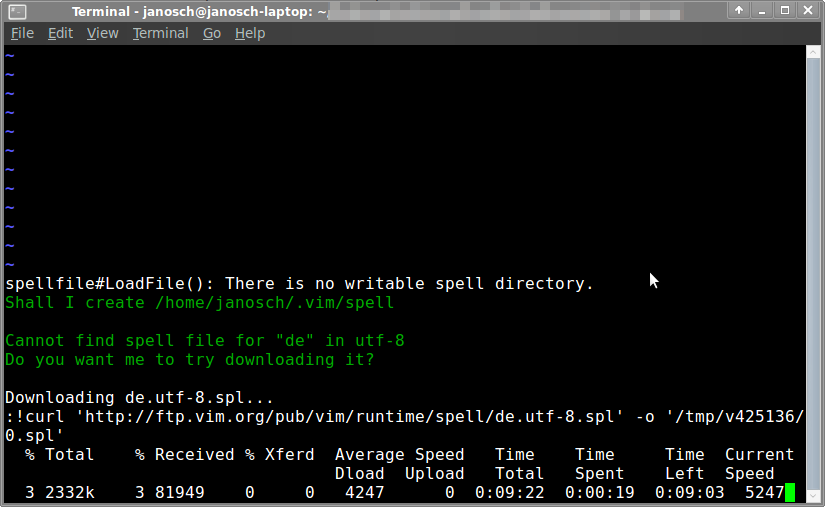 The English dictionary should be included. For other languages you will be asked if vim shall download it by itself. Words spelled wrong will now be marked red, grammar mistakes blue. To unset the spell checking use:

To enable the spell checking by default insert the appropriate command (without the starting double point) in your ~/.vimrc.

Right now I can do 100 strokes per minute. And it is even more fun. The only problem I have are the typos I make – They are many. If there is a good method to learn how to avoid them I would be really grateful.

Installing on Ubuntu 9.10
Set the active keyboard layout in “System → Settings → Keyboard” to “German → Neo”. Neo is now active but only a beta version in which (compared to the current version) for example “ü” and “ö” are changed.
Download the recent xkb.tgz

and replace the old files (do not forget to make a backup).

More tutorials for installing Neo on Linux, Windows and other operating systems can be found on the manufacturer’s homepage. (All linked homepages are in German)

Neo and vi(m)
In vim the keys “hjkl” are  used to navigate. Now these keys are spaced somewhere on the keyboard, so we better use “snrt” to have navigation on the same place as if we were using QWERTY. We exchange the particular letters.
Edit or create the file ~/.vimrc and add the following:

Neo and Virtualisation
I need to use windows at work, so I used to use VirtualBox. Try to install Windows. Everything worked fine until I should insert the license code. It was not possible to insert digits (even after changing the layout on the host back to QWERTY).
Since then I use QEMU and Neo is even running with the Windows drivers in my guest system.